Not My Best Carol Brady Moment! 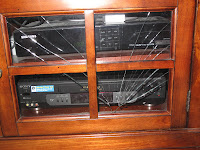 As an only child, I'm pretty sure I wanted to be a Brady, but perhaps even more, wanted to be a mom like Carol Brady. She was the kind of mom that always had the right words to say to her children. She disciplined in love and was never short on good advice.

However, she was pretty ticked in the episode where Peter broke her favorite vase.

Still, I don't remember her screaming at her kids.

So, I have two boys and they love to play ball. You already know where I'm going with this...

A few months ago, they were playing baseball in the living room where they have been told a million times NOT to play ball! And you guessed it! They broke something. Little Bryson was sliding into first base when his foot went into the glass cabinet on which our TV sits.

And I exploded! That particular piece of furniture was less than six months old and they knew better. Afterwards, I had to apologize and thankfully praise God that he wasn't cut anywhere. He could have easily needed stitches.

One night last week night, it happened again. This time it was a blow up beach baseball that took out an antique plate that belonged to my grandmother. Its home used to be atop my mantle. Until crash, boom, bang!

What did I do?

Yep, I exploded again. Threatening I don't remember what as I angrily swept up the pieces. Mad at myself perhaps for not putting the antiques away until my boys are away at college.

I had to apologize for getting angry again. And thank the Lord the plate didn't fall on his precious head. Sigh.

The next day at the pool, Bryson took the beach ball to play with. Harmless at the pool, right? Or one would think.

As we were getting ready to leave, I had my back turned to him. I was saying goodbye to a friend and folding up my chairs. When I heard a familiar crash, boom, bang - again!

The clock to the pool was lying on the concrete with the glass face shattered. Bryson was standing there with a look of shock and guilt all at the same time.

Evidently, he was bouncing the ball against the wall when it hit the clock and knocked it off the wall.

The first words out of my mouth were, "That ball is going in the trash when we get home."

Realizing my words must have seemed a bit harsh to the moms around me, I explained that I couldn't believe he had broken something else with this same ball in less than 24 hours!

At least I didn't scream this time. Although in all honesty, it was probably because we were in a public place. I asked the manager if we needed to buy another clock and had Bryson apologize as well.

She was very gracious. No one was angry.

Still I have to wonder what in the world is God trying to teach me through all these broken pieces?

I know that I need to use my words more carefully. To build up and not tear down.

The very next day, Jesus Calling, by Sarah Young, spoke directly to me, "Watch your words diligently. words have such great power to bless or to wound. When you speak carelessly or negatively, you damage others as well as yourself."

Perhaps I need to realize that when things break, a heart doesn't need to be broken as well. A heart is more fragile and valuable than any antique plate. And a heart has feelings.

Reckless words pierce like a sword, but the tongue of the wise brings healing. Proverbs 12:18

My dear brothers, take note of this: Everyone should be quick to listen, slow to speak, and slow to become angry, for man's anger does not bring about the righteous life that God desires. James 1:19-20

Lord, help me to stop and think. Count to ten. Bite my tongue. Whatever it takes before I hurt someone with my words. Help me to be a better listener, use more caution with my words, and become slow to anger. In Jesus' Name. Amen.