Lifting the Ban – Something to Celebrate! 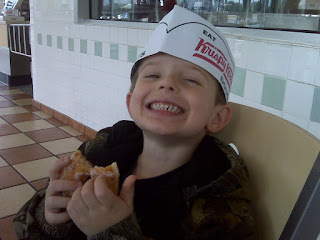 “…God is sheer mercy and grace; not easily angered, he’s rich in love. He doesn’t endlessly nag and scold, nor hold grudges forever. He doesn’t treat us as our sins deserve, nor pay us back in full for our wrongs...” Psalm 103:4-21 (The Message)

Krispy Kreme doughnuts! My mouth waters as I drive by their store if the “Hot Doughnuts Now” red light is on! The plain glazed being my favorite!

Living in the same town as their headquarters, we grew up on Krispy Kreme. It was even the doughnut of choice for my grandparents!

My older two children sort of grew up on Krispy Kreme too. That is until my husband decided to hold a grudge against the doughnut maker when a business deal fell through and they chose to buy from a competitor. My husband, being in sales, decided that if they wouldn’t buy from him, we shouldn’t buy from them.

Our family was suddenly banned from purchasing and enjoying the beloved doughnuts. My husband and I didn’t even partake when they were brought to Sunday school! I’ll admit, sometimes that was tough, especially when my stomach was growling!

While my kids showed no loyalty when they were with their dad, or if Grandma became their enabler and snuck them a few here and there, my husband and I did not eat a Krispy Kreme for at least 5 years. I know this because the ban began before our youngest was born in 2006.

Little B never tasted a Krispy Kreme. He was growing up on Dunkin and Sweet Sixteen instead!

A couple of weeks ago, Bryson’s preschool had Doughnuts for Dad. And Bryson excitedly reported to his dad that they were going to have Krispy Kreme doughnuts for breakfast that morning! (I truly believe he thought his dad had never tried one before!)

I told my husband, “You know you’re going to have to eat a doughnut. It would be rude if you didn’t.”

To my surprise he replied, “I know. I’ve been thinking about lifting the ban anyway.”

And so the ban was lifted! And it was a happy day in the Long household again. Bryson and I celebrated by visiting the store with friends after a Friday morning adventure to the Children’s Museum! And it was a sweet time!

So sweet in fact that I ended up buying 3 more boxes before the weekend was over! Guess I was making up for lost time, huh?

Grudges are no good. God doesn’t want us to hold grudges. He doesn’t hold them against us forever, as the psalm says, and He expects us to behave the same in our relationships.

The times in my life that I held a grudge, I later discovered that I was the one who missed out!

Is there a situation in your life where you need to lift the ban? Let it go…let bygones be bygones?

I guarantee that life will be much sweeter if you do!

Lord, forgive me for the times I have held grudges against others. Open my eyes to show me if there is any unforgiveness I’m still holding on to and help me to lift any bans that I have established over my heart that hinders my relationship with others. It is my desire to let go of them and surrender them to You.
Email ThisBlogThis!Share to TwitterShare to FacebookShare to Pinterest